Whilst VE Day marked the end of the war in Europe in May 1945, many thousands of Armed Forces personnel were still involved in bitter fighting in the Far East.

Victory over Japan would come at a heavy price, and Victory over Japan Day (VJ Day) marks the day Japan surrendered on the 15 August 1945, which in effect ended World War II.  VJ Day takes place every year on August 15 in the UK and this year celebrations will be a little different due to the coronavirus pandemic. (For information on what is proposed see https://www.britishlegion.org.uk/get-involved/remembrance/remembrance-events/vj-day#:~:text=15%20August%202020%20is%20the%2075th%20anniversary%20of,brought%20an%20end%20to%20the%20Second%20World%20War.)

They were the soldiers who found themselves in the midst of a military disaster – and who often regarded themselves as the Forgotten Army at the end of the Second World War.

Aug 19 Sun - “Last week we had our V.J. Day for the defeat of Japan.  The headstocks were lit up some of the children had tea in the New Village in the streets.  I had only one holiday, I was on nights.  The Pits in Nottinghamshire decided to work August Bank Holiday Monday*.  I was doing the chargemans job & so had to go on at 6P.M. Sunday till 6.30 A.M. next morning, two more men should have come on at 10.30 P.M. but did not come so I was with myself all night.  Rene Clarke was talking to me today she got back from her holidays.  *nobody turned up so they couldn’t work”. 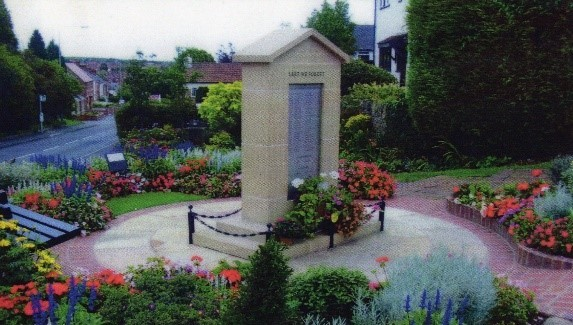 The War Memorial on Main Street, Blidworth pictured here was dedicated on 3rd November 2007 and although originally it was to include the fallen servicemen and women of WWI, it was decided to include from WWI to Afghanistan.

Tom Murray was part of the committee to get the memorial in place and carried out vital research finding those names of the lost during the actions of WWII.  He wrote and published his book and has kindly agreed to us using some of the information from it in our Society’s news.

Fighting in the Asia-Pacific took place from Hawaii to North East India.  This year we remember the contribution of all Commonwealth and Allied Forces, without whom victory and the freedoms and way of life we enjoy today would not have been possible.

The following people are some of those who died in this theatre of war:

Age shall not wary them nor the years condemn

At the going down of the sun an in the morning

We will remember them

As our cinema’s begin to open and we look forward to enjoying the big screen films of today, our thoughts go back to the time of the picture houses in Blidworth & Rainworth. This programme dated 1935, 4 years before the start of WWII.

The Marines  are Coming - film 1934 - A brash marine assigned to a new post under the command of his former rival. The marine falls in love with his commanding officer's fiancée and romances her away from him…..

Adverts for various businesses in and around Rainworth: 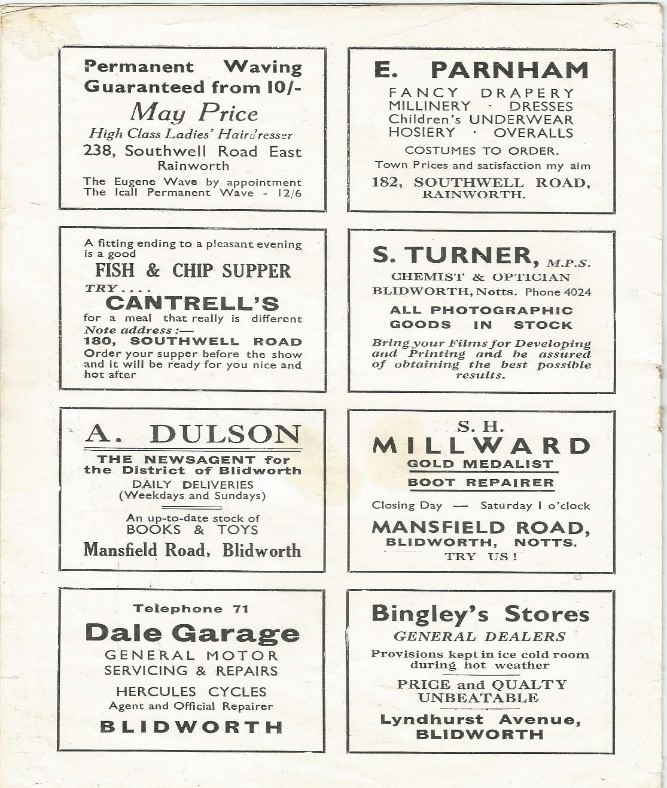 Pathé News was a producer of newsreels and documentaries from 1910 to 1970 in the United Kingdom. Its founder, Charles Pathé, was a pioneer of moving pictures in the silent era. The Pathé News archive is known today as British Pathé. Its collection of news film and movies is fully digitised and available online.

I was born in Rainworth, still living in the house I was born in 64 years ago this year.  I learned some of the village’s history whilst at school.  I was told the village was termed a “ribbon” village, meaning that houses and shops were built along and in line with the original road that comes from Southwell to Mansfield; named Southwell Road – divided into East and West.  Later as the village developed with the Rufford Pit; public transport (train); and the need for more housing, it became a village with 5 distinct estates around the original village.

There are several sources of material depicting the development of the village from the original settlement in Roman times.  Will Richards, referenced the village in many of his books, as did Sam and Harry Clarke (Harry worked at Rufford Pit) in their diaries.

Wikipedia records: “Rainworth started as a settlement close to a Roman road that went through Mansfield and Newark, and provided access to the coalfields of Derbyshire for the Roman settlements in the area to the east of Nottinghamshire. The sheltered location and access to clean water from the River Idle (now called Rainworth Water), meant that the area was often used by travelling Romans as a camp site. In the year 617 AD, a mighty Roman warrior, Readwald, stayed at the site prior to a battle with Ethelfrith, King of Mercia. In the battle, Readwald's son, Regehere, was killed, and from that day, the area was known as Regehere's Wath (Wath being a ford or crossing point over a river). Over the years, many changes in the spelling of the name have been recorded, from the original Regehere's Wath to Reynwath by 1268, then Raynwath, and then to the present-day name of Rainworth. Rainworth Lodge was first built in 1190 as a hunting lodge. Rufus Clarke lived there in 1212 and was with King John's hunting parties in the forest. Little more is known about the village until the 16th century, when it is recorded that it was a peaceful hamlet with 13 dwellings:

The people who lived in Rainworth were farmers or nurserymen.

I live on the Wimpey estate – houses built of concrete to provide housing for the miners of Blidworth and Rainworth pits.  My family moved into our house on the 1st January 1954.  The first and only tenants.  Dad worked at Blidworth pit for 33years on the coal face.  I and my sister attended school at Blidworth County Council school (now Blidworth Oaks Primary school) before going to Joseph Whitaker and Sherwood Hall Grammar schools respectively. 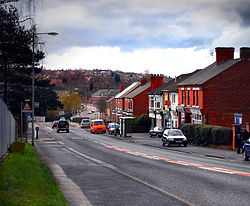 Rainworth pictured left, shows Southwell Road going down into the main village from Mansfield on the left is the Pumping station and, on the right, (off shot) is the Methodist Church. Rainworth Water (previously River Idle), feeds Rufford Mill and Lake, plus  L-Lake which is part of Rainworth Lakes that are a site of special scientific interest.

The river rises in Normanshill Wood, to the north-west of Ravenshead and flows eastwards, passing under the A60 road, and to the south of Portland Training College.

Some dates and sites to explore:

1871 – train link from Mansfield to Southwell opened; station in Rainworth 100 years ago, Ravenshead was centred on an area called Fishpool, this name appeared on a 15th-century map.  There can still be found a signpost in Blidworth Bottoms indicating the direction of Fishpool.  This name pertaining to the fish pools of Newstead Abbey. 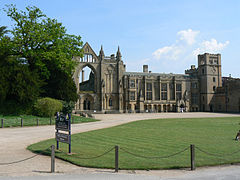 Newstead Abbey, a 12th-century grade 1 listed building and ancestral home of Lord Byron, is accessed from the village. After the death of Thomas Becket, King Henry II supposedly to make up for this terrible deed gave the Canons of the Order of St Augustine the land at Ravenshead where they set up a priory, the walls of which can still be seen today. It is here that the name Ravenshead is first encountered. "Ravenshede begins at the aforesaidway which lies from Papilwyke [Papplewick] to Blydeworthe, along the hollowroad eastward which is called Thefestyghe: and this leads to the King's highway which is called Nottinghamgate."

In the Middle Ages the priory was a stopping place for pilgrims. Fishpool Hoard of 1,237 15th century gold coins, four rings and four other pieces of jewellery, and two lengths of gold chain was discovered by workmen on a building site near present day Cambourne Gardens, in Ravenshead, an area then known as “Fishpool”.

It is the largest hoard of medieval coins ever found in Britain. To judge from the dates of the coins the hoard was probably buried in haste at some time between winter 1463 and summer 1464, perhaps by someone fleeing south after the Battle of Hexham in May 1464, in the first stages of England's civil war between aristocratic factions, the War of the Roses. The British Museum assesses the face value of the hoard when deposited, about £400, would be equivalent to around £300,000 today.

As soon as we have any information as to when we can meet again we will try and contact the membership individually (please contact us to ensure we have your most up to date contact details –  by email to blidworthhistory@virginmedia.com or check out both our website http://www.blidworthhistoricalsociety.co.uk/ or Facebook page Blidworth & District Historical and Heritage Society