Albert Spinks the Gamekeeper, Joseph Whitaker and the Egyptian Nightjar

Our story begins in 1883, June 23rd to be precise. On that day, Albert Spinks whilst shooting at a rabbit, disturbed a bird and it flew away from the side of the pathway where he stood. He fired his second barrel and brought it down. He noticed its curious colour, came to the conclusion it was a young bird, took it home and threw it into the ashpit.

Joseph Whitaker, naturalist and sportsman of Rainworth Lodge, called on Albert  Spinks and the incident of the bird came into the conversation, whereupon Albert fetched the bird to show him.   To quote Joseph Whitaker “I thought it was a variety and sent it to my stuffer who contrived to make a fair specimen of it” It turns out to be an Egyptian Nightjar and only the second occurrence of this bird in Europe, and the first known sighting in Britain at that time. This stuffed Egyptian Nightjar is stored in the Mansfield Museum.

A memorial stone was erected on the spot where the bird was shot, but sadly in 1972 the memorial was very badly damaged by vandals. Wilf Wild wrote in his book that he searched through the bracken and found most of the pieces. Will Richards wrote that in 1985 whilst walking with Roland Berridge who worked in Thieves Wood as a forester, that they found a further piece. Will Richards also wrote that all these pieces are in safe keeping. It was felt that if the memorial was rebuilt it would meet a similar fate. In 1989 a more vandal proof stone was erected close to the original spot.

Joseph Whitaker died at the age of 82 years on May 27th 1932, he was cremated and his remains deposited in the grounds of Rainworth Lodge. 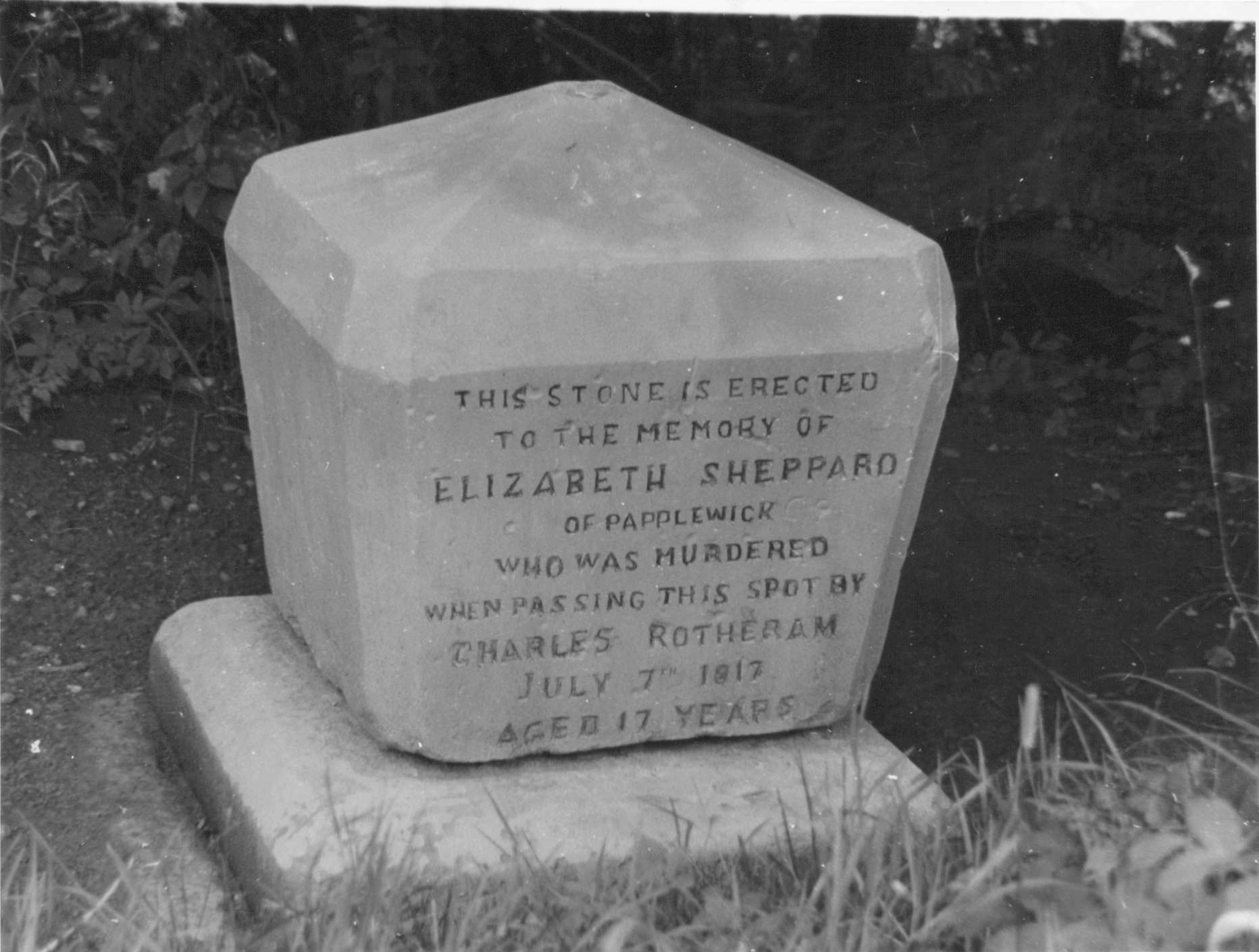 Every day thousands of motorists travel along the A60 Nottingham Road diving past Harlow Wood and don’t notice the marker stone which tells of the tragic incident that happened there many years ago when it was a lonely and unlit country road.

On July 6th 1817, a young girl aged 17 by the name of Elizabeth Sheppard left her home in Papplewick and walked along this road travelling to Mansfield looking for work. Its possible that she intended staying there until she found a job or possibly she just enjoyed herself there, but either way she did if fact stay overnight. Being successful in finding a job, the following morning she started the long walk home along Nottingham Rd and past Harlow Wood. At the bottom of the hill near the bend in the road she disturbed a man who was sleeping under a hedge at the side of the road. Without any warning the man hit the poor girl on the left side of her head knocking Bessie senseless and sending her spinning to the ground. He then continued to beat her and the injuries are very well documented. Finding no money on the girl he untied her shoes and also stole her yellow umbrella that she was carrying.

After throwing the body into the ditch by the roadside he continued on his journey towards Nottingham stopping at the 7 mile inn to try and sell the shoes. Being unsuccessful he continued on to the 3 Crowns Inn at Redhill, where he did in fact manage to sell the shoes and also left without the umbrella.

The man was later identified as one Charles Rotherham, a 33 years old scissor grinder from Sheffield.

The body was found by some quarrymen who were travelling past the spot. They also found the murder weapon which was a blood stained hedge stake. The body was taken to Sutton for an inquest that lasted two days. After leaving such a clear trail the police and the public knew who to look for and Constable Benjamin Barnes duly arrested Charles Rotherham near Loughborough. The officer had to fend off an angry crowd who wanted to impose their own justice. Constable Barnes took Charles Rotherham back to the scene of the crime where he admitted everything, but the motive is still unclear. Bessie Sheppard was apparently in the wrong place at the wrong time.

It was said at the trial that Charles Rotherham’s 18 years in the army may have dulled his sense of decency.

He was found guilty and on Monday July 28th 1817 there was a public execution by hanging in Nottingham.

A penny dreadful was produced telling the whole story in much more detail and a copy is in Mansfield museum.

A man by the name of Anthony Buckles started a collection, which gathered together enough money to construct and site the monument that we see today on Nottingham Rd, although in 1960 the road was widened and the stone moved slightly, and another more permanent inscription added to the opposite side.

As for the motive. In 1817 Charles Rotherham was 33 years old and therefore his 18 years in the army probably included many years of the fighting against Napoleon and France and he could possibly have been at Waterloo in 1815.

Considering his experiences of that time, is it hardly surprising that his sense of decency was dulled ?

Today that would be considered to be Post Traumatic Stress, and so, a very tragic story from whichever way you look at it.

Bessie was buried in Papplewick Churchyard and in 1988 the police were called to the grave because vandals had removed the gravestone. To publicise the incident the police officers visited the monument on Nottingham Road together with an Evening Post photographer. Whilst they were there and being photographed touching the monument one of the officers was inspired to go back to the grave and conduct a further search. The grave stone was found under a some hedging and was replaced.

There are numerous stories of the ghost of Bessie Sheppard in the vicinity of the monument Apparently motorists have stopped to give a lift to a girl who then disappeared. She has been seen many times by staff on the wards of the old Harlow Wood hospital. Stands in a field close to Lyndhurst Farm near to a public footpath and Black Scotch Lane.
The inscription reads,
This Stone from the Ancient Market House of Mansfield was placed here in 1752 AD by Henrietta Cavendish Holles Harley, Countess of Oxford, Lady of the Manor, to mark the site of the Great Forest Court and Swainmote. On this place the Justice in Eyre met the Great Officers of the forest every seven years for the administration of its affairs, and here also the Verderers met the Swains or Freeholders in a Moot three times a year for the purpose of renting pasturage.
The Forest Stone was originally the central pillar of the Market House in Mansfield. It can be deduced from some letters carved into the stone that it has been erected upside down to how it formally stood. The land just to the west of the stone is currently being developed and it remains to be seen from any planning applications yet to be presented, if any consideration is being allowed for the preservation of the Forest Stone. 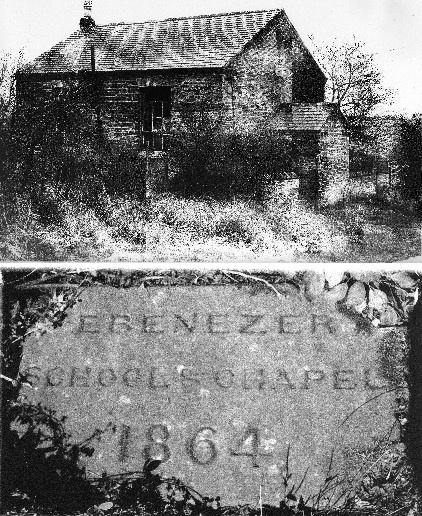 The Ebenezer Chapel and stone

This Methodist Chapel, built in 1864, once stood on Chapel Lane Ravenshead. After 1945 it was used only for Sunday School and Harvest Festivals and became disused as a chapel altogether in 1949. It did continue to be used by the Ministry of Food for the distribution of ration books until the early 1950’s.

In its day the Ebenezer School & Chapel was very well attended and congregation and clergy would travel a good way to attend. Mrs. Rose who lived on Chapel lane in 1955 wrote in the Chad newspaper “I have 9 children and 3 generations of my family were regular visitors. You had to be there a quarter of an hour early or you wouldn’t get a seat. Farmers and their families from outlying farms attended in all weathers. The Band of Hope and Christian Endeavour meetings were held on weeknights and young people went regularly”

In 1872 one of the founders and Sunday School Superintendent, Mr Richard William Clay was buried under the aisle. This caused a real problem when the building was no longer required and was put up for sale. Before it could be used for any other purpose the grave would need to be removed and exhumation is a very costly and time consuming business. So the doors and windows were all boarded up whilst the administrators started the process and eventually the body was re-interred into the Blidworth Churchyard.

A stone that was originally set into the gable end of the Chapel facing the road,  is now set  in the garden of a house on Chapel Lane, it reads “Ebenezer School & Chapel 1864” The Chapel was pulled down in 1957 and a house built on the site. 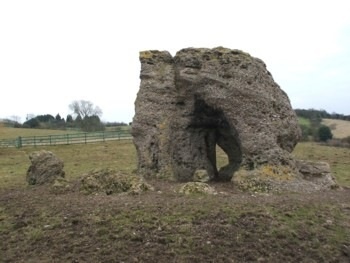 During the Ice Age glaciers deposit sediment when they melt and leave behind whatever was once frozen in the ice. This can be a mixture of particles and rocks of all sizes.

On the outskirts of Blidworth not too far from St. Mary's church sits a large holed stone known locally as the Druid Stone or the Blidworth Boulder.

No one knows for certain if Druids ever worshiped in this area. The stone as we see it today dates back several centuries and would have been created during the last ice age thousands of years ago.
The 14 ft high Stone is situated on private land and is in the corner of a field. A public footpath is adjacent to the field but the stone is best viewed from higher ground along the footpath to the west. More information about the Druid Stone can be seen on the "Your Contributions" page of our web site.